Dovrefjell…. as never before!

As I announced in my previous post, I have been guiding two Dutch photographers (Peter v.d. Veen and René Visser) trough Dovrefjell from the 6th till the 9th of September. And I’m happy to announce that this has been a great success!!! This is the story why it has been such a great success.

The goal of the trip was to photograph Musk-oxen deep in Dovrefjell National park and try to find reindeer and arctic fox additionally. I guaranteed my guests that we would find musk-oxen, however I told them that they should not expect to see any reindeer and especially no arctic fox. Luckily I’m not always right…

Dovrefjell lays about 350 North of Oslo and is known for its wild ranging Musk-ox, Reindeer and the illusive Arctic fox. In 2010 I took part in a reindeer research project where I had to observe all large wildlife and human activity in Dovrefjell for 3 weeks. During these 3 weeks, I got quite familiar with the area and where and how to find the wildlife. After these 3 weeks I returned a few more times to Dovrefjell and gained more knowledge about this wonderful but especially harsh area.
The weather forecast predicted great weather for the period that I would be guiding Peter and René. However, Dovrefjell is known for its own harsh weather system and can chance before you know it. Because of this, I told my two guest photographers to bring warm clothing and to be prepared for harsh weather conditions.

When I arrived at Dovrefjell there was a strong wind blowing and the air felt cold. So I was happy that I brought warm clothing and that I also told my guest to bring warm clothing too.

I had a few hours before my guest would arrive, so I used this time to look for tracks in an area where the arctic fox has been seen before. In one particular area I found quite a lot of fresh and older scats of the arctic fox, indication they were in the area. However, that is no guarantee that you actually will find them. After a few hours of searching I went to the location where I was supposed to meet with my two guests. Perfect timing, they just arrived. After introducing us to each other, we took the cameras and searched for another hour for the arctic fox, with no results. I decided that it would be the best if my guest would sit and wait at the location where I found the scats while I would continue to search the rest of the area. So we did, Peter and René were posting at the scats and I continued alone.

After half an hour searching, I suddenly spotted something fuzzy lying on a rock in the sun, about 50 meter away from me. Before I could ask myself if it was an arctic fox, another fuzzy creature appeared from the rocks and stretched itself. I couldn’t believe my own eyes, right in front of me were two arctic fox relaxing in the sun!!!
Quickly I took some pictures as proof that I really had seen two arctic fox (not knowing what still was to come) and called Peter and René to come down to the area where I was. I was afraid that the foxes would disappear between the rocks before Peter and René would come, so I kept my distance but didn’t lose them out of sight. The two fox however, were not slightly impressed by my presence and kept on sleeping in the sun. Lucky Peter and René arrived fast at the location and could join me in photographing the two small foxes. When we tried to change position in order to get the light from behind, the situation suddenly changed from amazing into unbelievable amazing. From between the rocks 3 more arctic foxes appeared!!! Before we knew it we were photographing 5 young arctic fox kittens which didn’t appear to be that afraid yet of humans.
The following pictures are taken by Peter vd Veen.


The following pictures are taken by René Visser.


The following pictures are taken by me. 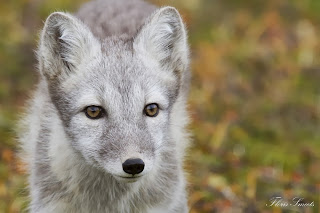 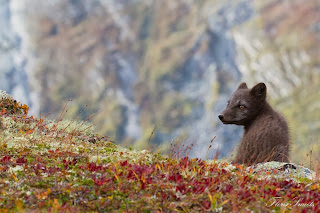 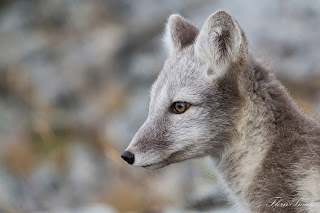 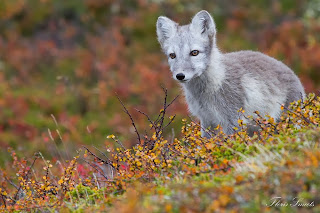 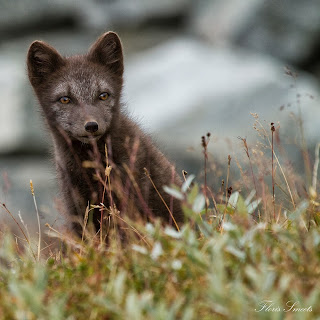 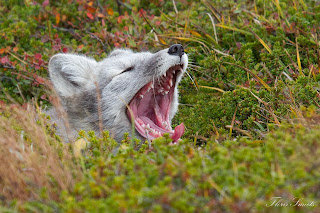 …an experience I will never forget!!! And what a start of the trip!!!

The second day we prepared ourselves for the hard and long trip we had to make that day in order to reach our cabin (Reinheim) for the coming two nights. We had to walk up into the mountains with heavy backpacks. The plan was to take it easy and try to photograph as much as possible during the trip.
After approximately an hour walking we spotted the first musk-oxen in the distance. Since these were walking high up a steep hill with no nice background, we decided to continue and look for others. We didn’t have to wait long before we spotted a large bull. He was a bit lower in the terrain as us, but was making his way higher up. We took place at a spot where we had a good point of view on where we thought the bull would cross over a small ridge. While taking position I almost stepped on top of a short eared owl. Too bad we were not ready for that, so no pictures of the owl. But then we noticed that we were not the only ones who spotted this bull. From behind the bull a man appeared with his camera and approached the bull closer and closer. Something which is not to advice since musk-oxen are very grumpy animals which can suddenly charge. We don’t know what exactly happened, but suddenly the man started running like hell from the bull. Which gave me this funny picture. 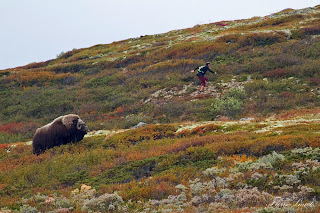 Luckily our waiting strategy paid off. The bull continued to move higher up and passed right in front of our lenses over the ridge.
Picture taken by René Visser.
Pictures taken by me. 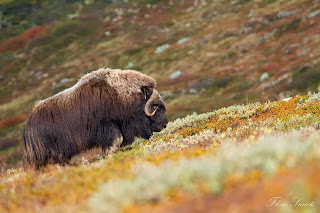 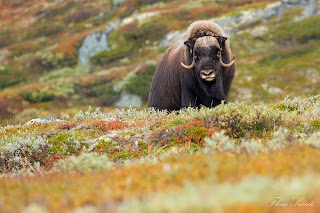 After getting our shots, we continued on our way up to the cabin. On our way we came across some more musk-oxen but no conditions for good pictures. Just before it got dark we arrived at Reinheim, completely exhausted! The bags with camera equipment and food were a bit heavier as expected…

Luckily we all had a good night of sleep, so managed to get some energy back. We needed that, since the musk-oxen were quite a bit lower in the terrain as usual, so we had a long walk to go before we would be back at the musk-oxen. Luckily one small herd of musk-oxen came down some cliffs about one hour walk from the cabin. They were in a very rocky terrain with a waterfall coming down. We were hoping that they  would pass in front of the waterfall. So we positioned ourselves on top of some big rocks and waited.
After about an hour the first musk-ox passed the waterfall, but exactly behind a ridge. The rest of the herd followed not too long after that, but all of them behind the ridge. Except the last female with her calf, they changed their path and took position on the small ridge in front of the waterfall. 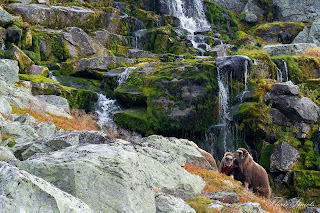 The whole herd continued up the cliffs. Amazing to see how easily such large animals can go up such steep rocky cliffs.
Picture taken by René Visser.

Pictures taken by me. 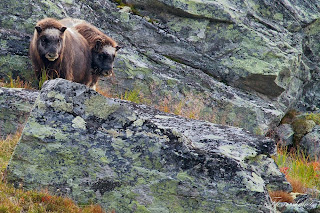 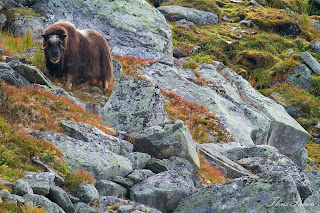 After the herd had settled on top of the cliffs we got our smaller lenses out and took some long-shutter-time shots of the waterfall and the creek coming from the waterfall.
Picture taken by Peter vd Veen.
We continued our way further down to the area were we saw most of the musk-oxen the day before. After a bit more than an hour walking we came across a lonely bull. We passed it and waited in its path. Suddenly it came around the hill…a lot closer as we expected.
Picture taken by Peter vd Veen.
Picture taken taken by me. 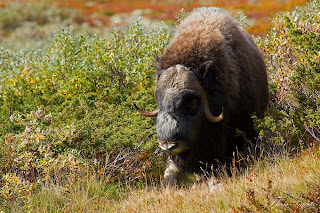 Luckily the bull stayed calm and after taking some pictures we left him alone.

From where we just photographed the bull we spotted the next group of musk-oxen. From that moment we had them everywhere around us and we spent hours of photographing them in all kinds of different settings and distances.
Pictures taken by Peter vd Veen.


Pictures taken by me. 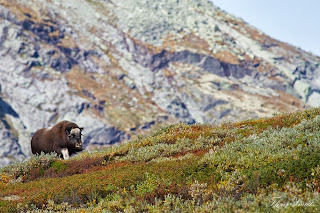 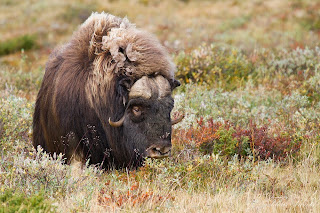 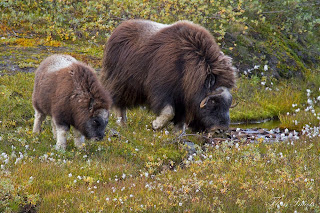 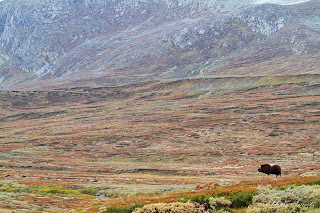 One group did not mind us being around, so we stayed for almost two hours with them, which gave us the chance to observe and photograph different behavior.
Pictures taken by me.


Suddenly the group started to run up the hills, back to the rest of the herd. After they left, we had to go back to our cabin in order to be back before sunset.

This was our last day of the trip. Early morning we had an amazing sunrise.
Picture taken by Peter vd Veen.
After enjoying the sunrise we packed all our stuff and left the cabin. We needed to walk over two hours before we came to the first musk-oxen. We positioned ourselves in a way so we would have the “famous”  mountain Snohetta on the background if the musk-oxen would pass over a ridge. However, the musk-oxen had another idea. A few hundred meters before the ridge they laid down for a nap. That gave us the chance to rest a bit too.
After a bit more than an hour, the musk-oxen woke up and moved on. They didn’t cross exactly over the ridge where we hoped, but still got some nice shots of them.
We managed to follow this herd for some more time, but then had to continue on our way back to the cars.
Picture taken by Peter vd Veen.
Pictures taken by René Visser.

Why did I give this trip the title: “Dovrefjell…. as never before!”?  Well, as I told you, Dovrefjell is known for its cold an harsh weather conditions. The first day it was very windy, however the rest of the days it was excellent weather. With an temperature around 18 degrees Celsius on day time, it was during the walks sometimes even to warm. We ended up walking in just a t-shirt and rolled up our trousers as far as possible. Something I have not experienced before in Dovrefjell… especially not in September when the leaves are already colored red and yellow.

Peter and René, thanks for your trust in me! I had an amazing time with you two and hope to see you again in the future!