After a successful first photo session with the red throated loons, I just had to go back. Last time the birds left exactly when the most intense colored sunlight hit the water. Therefor I definitely had to give it another try. The weather forecast for yesterday night seemed perfect for fog, so I spent another night in the tent at the lake. Directly after arrival I noticed already one big difference from my last visit. The number insects drastically increased!!! I brought several types of repellant, which normally do a great job, but nothing seemed to really work this time. I just had to accept the situation and make the most of it.

Just like last time, before I arrived at the lake the male left. This time the female joined him on the hunt. Too bad, but at least I could normally walk to the tent without any sneaking while being eaten by insects! The evening didn’t bring anything special, but when I looked out of the tent at about 2:30, I knew it was going to be a magical morning. The fog rose several meters from the water surface and there was a slight breeze pushing the fog over the lake.

Now it was just a matter of hoping that the birds would be on the lake when the first light would hit the water and that the wind doesn’t pick up too much. …luck was on my side today. The female and here chick were hidden in the vegetation. But one of the young birds was floated around in the thick fog.

The video gives a good impression of the scenery. You can hear the female and the other young bird calling on the background. …pure magic…

Exactly at the moment where the colors were most intense, the other young bird landed on the lake too.

When the young birds left again, it was nearly impossible for the autofocus to focus against the strong light.

Almost directly after the young birds left, the male arrived. After having delivered the fish to the chick, he came a bit closer to me and took off again. The point where he started, the back light was too intense to find the focus on the bird. I could just hope that I managed to get the focus on the bird after the first few shots. I almost didn’t dare to look on my camera display to see if the focus managed to find the bird…. Yes…. It did!


One of the young birds returned shortly, but almost immediately took off again. There was just a tiny bit of fog left on the lake, which was beautifully colored orange.

After that I had one more chance to photograph the male during takeoff before being burned out of the tent by the sun.

Additionally to the pictures, I ended up with 57 insect bites on my right foot 26 on my left foot and plenty more in my face and on my hands. But it was worth it!

One of those nights.

About two weeks ago, a friend tipped me about a nesting pair of red throated loons, not too far from where I live. Additionally to the nesting pair there are two more red throated loons in the area, which probably are the chicks from last year. The birds are on a small lake which doesn’t hold any fish. Meaning that they have to fly out to one of the other lakes in order to catch food. This produces great chances to photograph the birds during takeoff and landing. But there is one problem, they are very shy and it is not possible to come close to the water without disturbing them. So two days ago I place a photo tent, with the plan to photograph them the following evening/night. The weather forecast said there would be no wind and clear skies… meaning a high probability for fog on the water during the night. Therefor, I placed the tent so that I would have back-light in the morning

As planned, I arrived yesterday evening (around 21:00) at my tent and sneaked in. Just before arriving at my tent, I saw the male leave to one of the other lakes to catch fish. …if I would have been a bit earlier, I would have been able to photograph it… too bad. But normally it shouldn’t take long for the male to return, since it has to feed the female and the one chick which hatched a few days ago. After having installed my camera equipment, I took some pictures of the female in the distance on the nest and waited for the return of the male. The chicks from last year, where nowhere to be seen.
The hours ticked by, but no male, no other birds and the female hasn’t moved a bit. Around midnight the male still hadn’t returned and it had gotten too dark to photograph it, if it would return within the next 3 hours. I want wanted to stay awake, in order to see if the male would come back and when it would come back. So I occupied myself with photographing the reflection of the pine forest on the lake.


Hours passed, but nothing. Fog started to build up on the lake, but no birds to photograph. I thought… “it is one of those nights, where you spend hours and hours waiting without any result”. …I must have dozed off, because at 02:30 I suddenly woke up by the screaming alarm call of the female. I quickly looked through my camera to see what is going on. I had the camera fixed towards the nest, but saw instead of the loon, a red fox at the nest.

I was afraid that it managed to catch the chick, but luckily I quickly found out that the chick was swimming safely next to its mother. I wonder if this fox has visited this nest before, since there is only one chick, but there were two eggs.

Suddenly the fox noticed something in the distance and run off. Hopefully it won’t come back.

The female didn’t waste any time and almost directly got back on the nest.

Finally, at 03:50 I heard the male return, and luckily with a fish! The female and chick have been without food for almost 7 hours. The fish was about the same size as the chick, so I was quite surprised to see the whole fish disappear into this tiny bird.

The chick just swallowed the fish, when suddenly the two other loons literally crashed into the lake.

Everything went so fast, birds flying, running over the water, diving, splashing, from left to right, from right to left… it was hard to keep track of them while constantly changing the autofocus points and trying to keep the right settings in my camera, since the light conditions varied a lot over the lake. 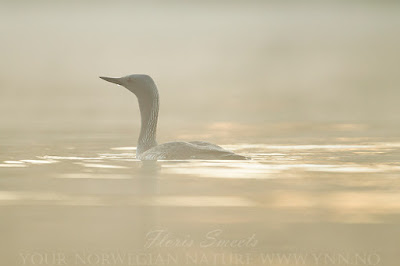 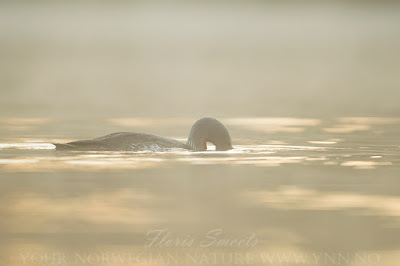 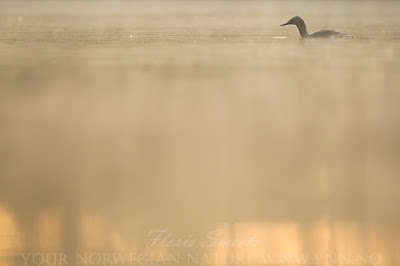 …but I couldn’t complain!

Sadly, just before the first direct sunlight hit the lake and colored the fog in bright orange (the light conditions I was waiting for), the loons left again and the female was back on the nest.

One and half hour later, at 05:30, the two young birds returned. The colors in the light were not that intense anymore, but it still produced a nice setting.

They swum around and were not that active as before.


About 45 minutes later they left again. Luckily I managed to photograph both takeoffs.


The light had gotten too intense to continue to photograph, but I was more than happy to end the session there. In the end I took about a thousand pictures… It was just one of those mornings…

Kjell, thank you for taking me in trust and sharing this amazing location with me!
Gepost door Unknown op 15:18 Geen opmerkingen: